In the Figure of Divine Substance

An experience of union with God is not so easy; the relinquishing of self, the realization that you, in your day-to-day self, are not so important. As I gradually achieved moments of awareness amidst all the moments of doubt, I found I had no words to describe them but I found words in reading the poetry of Mirabai and then St. Clare. I wondered, are there more people describing this? I found so many. I concentrated on women poets, not because the experience was only open to women; Rumi, Hafiz, St. John of the Cross and so many others speak eloquently of it; but because the women are not so well-known and being a woman and an artist is a very particular challenge.

I am a painter and I only really understand through painting. So I took each poem and responded to it by painting and in this way 33 paintings appeared.

I look at the paintings and they are not nearly as expressive as the poems, the poems show more. For in poetry you have the element of time; I read one line and then the next. In the painting I get an overall impression and then if I keep looking I notice things that I did not at first see, but the order of discovery is individual. Is it possible to translate a poem into a painting? Not if we define “translate” as saying something exactly in another language. But in any translation there is a moment of sense-free experience. We leave the original language and we are suspended in the realm of meaning, then we land in the target language. When we translate from one artistic expression to another, the time in the realm of meaning may be prolonged and so we learn to exist in the sense-free, we are offered a training here.

I used the poems as they came to me over the year I worked on this project. People sometimes sent me poems or told me poems, and some of them became paintings. I did not have a say over whether a poem became a painting. I would read a poem and either I saw where to begin or I didn’t, but I never knew what the end result would be. As I worked I realized that the possibilities were endless, I could continue forever. But at some point I had to say it’s enough for a book, or else I would still be painting but you would not be reading.

After I finished each painting I would read the poem aloud as I watched the painting, asking myself, does it resonate, are they in harmony, could they be part of the same song? 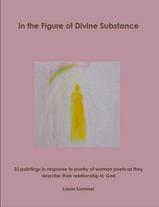